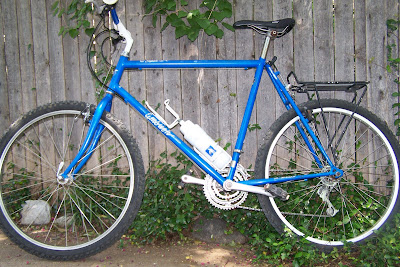 Out on a scrounging ride a couple of weeks ago I notice a big curbside trash pile--scrap metal, wood, plastic--and just visible to one side, an old bicycle. Turns out to be a trashed-out CyclePro Ambush, a good, basic mountain bike from the late 1980s; when I return to pick it up, the guy who's clearing trash tells me the bike's been sitting in his backyard since he moved into the house years ago.

Next step: take the bike down to my friend and master bike mechanic Rick at Colonel's Bicycles here in Ft. Worth. Over the course of a couple of afternoons, we (Rick, that is--I mostly just stand around and try to look useful) clean and rebuild the bike from second-hand parts. Front brakes, water bottle cage, water bottle, seat, and rear deck from my collection of scrounged bicycle parts. Touch-up paint, scrounged. Two tires left at the shop by a guy who was changing out the tires on his high-end mountain bike. Freewheel and front wheel from a bike found discarded down by the Trinity River and brought into the shop a while back.

Needless to say, the bike's already been out on some long scrounging rides. And as I soon as I log off this blog, it's heading out on another one.
Posted by scrappy at 4:17 PM